Posted at 13:47h in Blog by Liquid Riot 0 Comments

Liquid Riot Grisette is immensely drinkable, it’s 5% and so light and crisp. Grisette pairs beautifully with everything from our farro salad and fish tacos to the Kahuna burger. Honestly the best news about Grisette is that we created it using exclusively Maine ingredients. We used raw wheat from Maine Grains, malt from Blue Ox Mathouse, and Sterling hops from the Hop Yard. With all that Maine in there, it just tastes better. 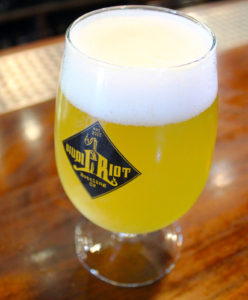 Another aspect to Grisettes that we really like is the heritage. They were originally brewed for Belgian miners. Here’s what we discovered… thanks to Draft Magazine

1. Grisettes were originally brewed for miners in Belgium’s Hainaut province. According to the book “Farmhouse Ales” by Phil Markowski, and to the brewers I spoke to, as the Hainaut region began to shift from farming to industry (primarily coal and stone mining), its beers changed as well. “Grisettes were for miners, and saisons were for your seasonal workers,” says Side Project brewer Cory King, who brews a grisette as well as many subtypes of saisons. Some say the term grisette refers to the “grey” color of the beer (gris is “grey” in French) due to its long boiling time and percentage of wheat in the grain bill; others say it refers to the grey pinafores worn by the women who would serve the beer to returning miners. But I like Yvan De Baets’ explanation for its vivid imagery: “The beer was made in a region with a lot of stone quarries, and it would quench the thirst of those workers, who came back from work covered with grey dust.”

2. Grisettes are low in alcohol. There’s something to be said for not mixing high-strength beer and mining, but more than that, grisettes were designed to refresh workers after what must have been a cramped, taxing day below ground. Saisons were also probably lower in ABV traditionally; De Baets points to three or four substyles of grisette: grisette jeune (or “young,” brewed yearround), grisette de garde or de saison (a grisette “for keeping,” brewed September through December), and grisette supériere, a double grisette that may have been higher in alcohol. There also may have been a table beer style brewed with the second runnings from a first batch of grisette, which would have been quite low in alcohol. Most of the grisettes I’ve encountered are brewed near the 4% ABV mark.

3. Grisettes are brewed with malted wheat. This detail is perhaps grisette’s defining characteristic, because many Belgian beers of that period would have been brewed with unmalted wheat. It’s unclear precisely why malted wheat should make up a portion of a grisette’s grain bill, but Cory King speculates that it’s to add body and texture to a beer that, due to its low alcohol, could become quite watery and boring. He brews Side Project’s version with oats, malted wheat and spelt “to put lots of protein in there to maintain mouthfeel and excitement.” Likewise, Tim Cliffford of Sante Adairius Rustic Ales says a combination of malted and unmalted wheat make up approximately 40 percent of the grains used to brew Lady in Grey, SARA’s grisette (“It gives it a little heft, a little body for the 4.8% ABV,” Clifford says.)

4. Grisettes have noticeable hopping levels. “The quality of the last hops used at the end of boiling or in the hopback was regarded as being very important,” says De Baets. “And overall they were quite hoppy beers.” Maybe not compared to our modern IPAs, but for the time, grisettes placed a bit more emphasis on the quality of hops than farmhouse styles would have.

5. American brewers are leading the charge to revive the style. Despite its Belgian roots, American brewers have been the ones to resurrect grisettes from obscurity (see also: goses). “We give a lot of credit to Americans for reviving saisons, but we’ve always had Saison Dupont as the shining light to show us how to do it. With grisette, we don’t have a lot of commercial examples, so Americans are really far out in redefining this beer,” says Clifford. Cory King echoes him: “I think we in the U.S. are defining what these styles are because there’s not a lot of written history on them. I just sort of made up what our grisette was, and it’s one of my favorite beers that I make.”

Our resto-bar and waterfront deck will be open for dine-in service, Thursday-Monday, noon-9pm, with some new safety protocols in place. Please take the time to read the signs on the… https://t.co/QyttMkWrQx
View on Twitter
1
1
Liquid_Riot @Liquid_Riot
July 8, 2020 12:58am
Grand Reopening!
July, 9th
Noon-9pm

-Masks will be required
-Be prepared to give your name and phone number to the host
-Be kind to our staff and please be patient
-Will only be excepting Credit Card payment for… https://t.co/WKp79nHo3F
View on Twitter
0
1
Liquid_Riot @Liquid_Riot
July 3, 2020 12:40pm
Have a Happy and Safe Independence Day Weekend!

We look forward to seeing you when we reopen on July 9th. @ Liquid Riot Bottling Company https://t.co/ZovYvMqIE2
View on Twitter
0
0
Liquid_Riot @Liquid_Riot
July 2, 2020 5:47pm
We will be reopening on July 9th!
Our new hours will be
Thursday-Monday noon-9pm

There will be some new safety protocols in place.

Please read the signs at the front door before entering the Riot.
Most importantly… https://t.co/7cmPKLfP2J
View on Twitter
0
1
Liquid_Riot @Liquid_Riot
July 1, 2020 8:58am
Heads Up!
Curbside Pickup will be closed this week so we can prepare to reopen our doors once again for the first time in 3 1/2 Months.
Stay tuned for more info.

Order online https://t.co/RmkBBZkArc or follow the link in our bio @liquid_riot

Order online for Curbside Pickup on our website https://t.co/RmkBBZCbiK or follow… https://t.co/f13mzCM2IY
View on Twitter
0
1
Liquid_Riot @Liquid_Riot
June 7, 2020 11:58pm
Black Lives Matter isn’t another social media trend. People are getting killed. Please don’t just post a black square.
We will stand together and will not sit silent.

Order online at https://t.co/RmkBBZkArc or follow the link in our bio @liquid_riot