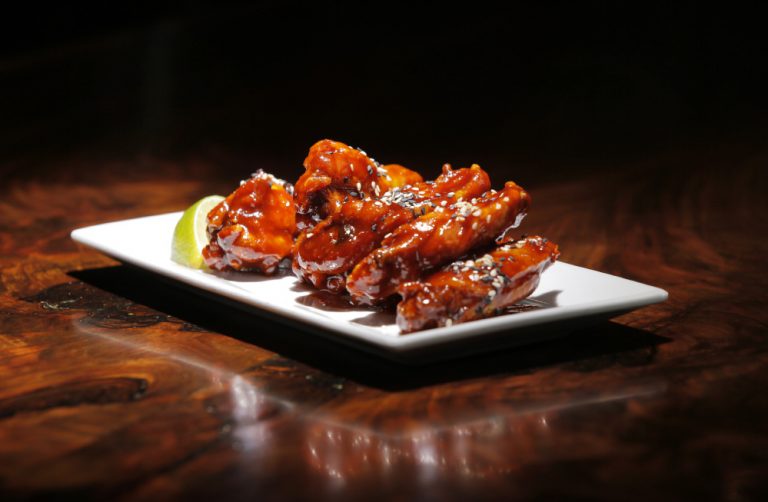 It’s a bar, sure, but Liquid Riot serves really good food, too. Liquid Riot’s food deserves its own top billing

In truth, Liquid Riot is much more than a bar. Its in-house distillery bottles a minty, 41-percent ABV Italian-style amaro called Fernet Michaud that is the star ingredient in the subtly sweet, wonderfully puckery Endless Summer cocktail ($10). And don’t forget the on-site brewery that produces upwards of a dozen beers, all available on tap – from an almost delicately effervescent lime-peel flavored session IPA called Herbie ($7 for 16 oz.), to a rough and ready dry lambic-style Raspy Trouble ($7.50 for 16 oz.) that tastes like sipping dark ale from a cold raspberry jam jar.
—-
Doria also doesn’t miss his chance to echo Liquid Riot’s primary identity in his cooking. His roasted mushroom toast ($12) features North Spore Mushroom’s “kitchen grade assortment,” a blend of oyster, shiitake and sometimes hen of the woods mushrooms, seared to order, then drizzled with a pan sauce made by deglazing with Liquid Riot’s Beer Schnapps. “Whatever is left at the bottom of the tanks and going to waste, we distill it into schnapps, and it tastes almost like a light whiskey,” Doria said. Served on a thick plank of Standard Baking sourdough and garnished with a few tiny, crisp-fried mushrooms, it’s an umami supernova that would be improved only by a few more pickled onions.
—-
Sure, there’s a phenomenally good housemade pretzel ($6), looped into the shape of a napping figure eight as an homage to Liquid Riot’s former name: Infinity. And yes, you’ll also find a 6-ounce beef burger ($15) served with sweet pickles and peppery arugula, pickled onions and Cabot cheddar cheese, all layered in a precise order that somehow keeps the brioche bun from ever getting soggy. Hamburger witchcraft, really.
—-
Chinese Takeout chicken wings are tossed in chef Joshua Doria’s special red sauce, a blend of Korean gochujang chili paste, Japanese mirin, soy sauce and chili oil, with a finishing sprinkle of black and white sesame seeds
—-
But further in, something unusual: an excellent salad of local goat cheese, kale and heirloom cherry tomatoes ($9), exuberantly seasoned with tarragon and mint and fortified with soft, barely chewy farro. “I wanted something a vegetarian could come in and have and feel satisfied. Farro is good for you and it’s filling,” Doria said. It’s not just for herbivores, either. I spotted a party of 12 college students seated on comfy, black leather sofas, sharing three servings of the farro salad with their burgers. Then, underneath sparkly sail tarps on the back patio, a couple cuddled up on adjacent aluminum-and-plywood barstools and split both the salad and the Chinese Takeout chicken wings ($12) as they watched the moonlight over Union Wharf.
—-
There’s gochujang in the aioli-based dipping sauce for Liquid Riot’s French fries ($6), as well, but that’s not the best thing about the dish. Cut from skin-on potatoes from Green Thumb Farms in Fryeburg, Doria’s fries are blanched in oil, frozen and then fried again to order and dusted with salt. Two ingredients. No margin for error. But Doria doesn’t need it. His fries are crisp, with buff-toned blisters and a steamy, tender interior. They are probably the best fries I have eaten in Maine.