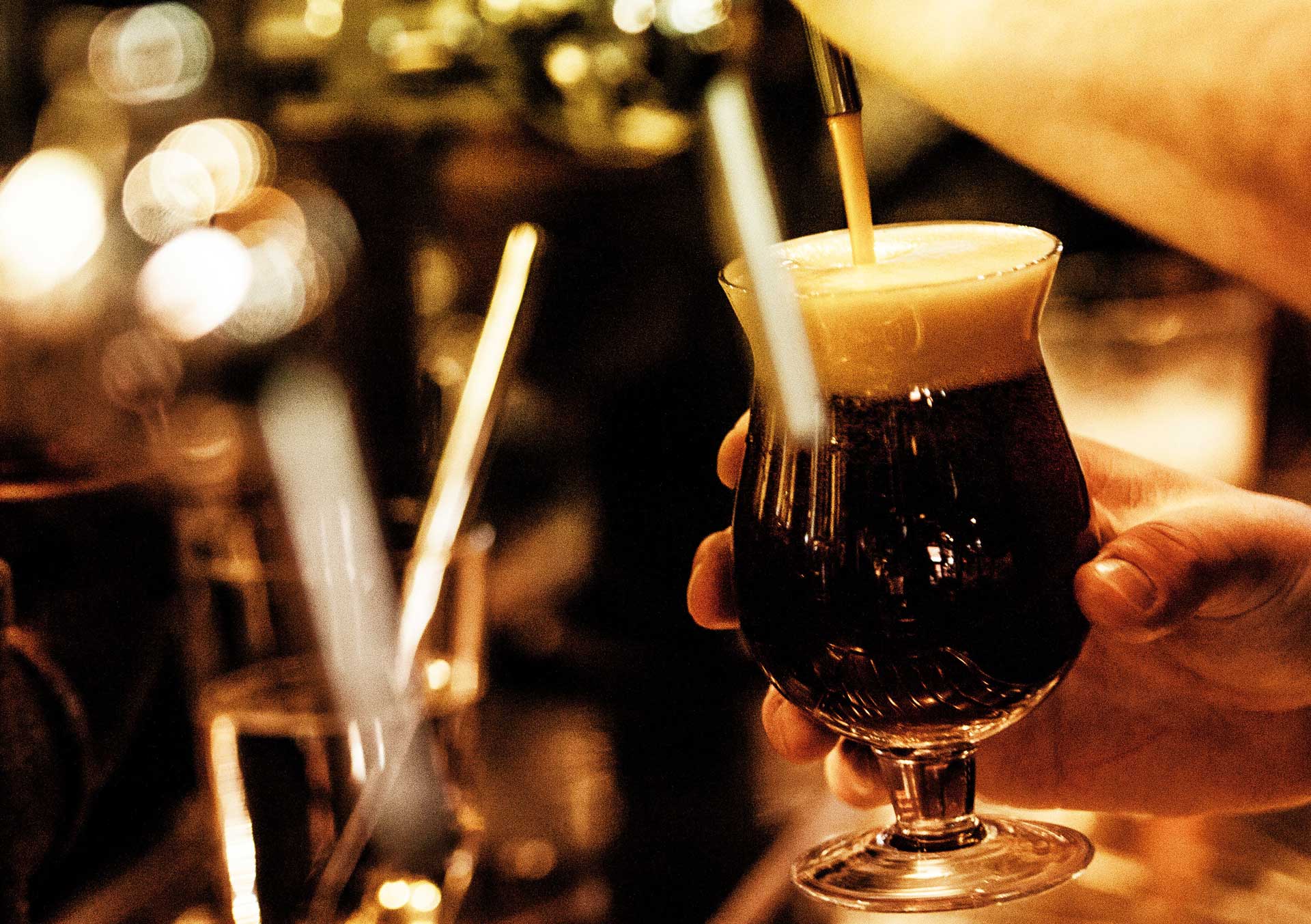 In no particular order…

In the fashion of French farmhouse ales, using barley, spelt, wheat and European hops. Clean and crisp with softs notes of malts and a whisp of smoke.

Collaboration with Tod Mot of up and coming Tributary Brewing. Co.  a classic rendition of the mellow, balanced altbiers of Germany. Nutty, slightly sweet, clean.

Brewed to honor the champion of the ladies arm wrestling event Over The Hops. Bold, piney, aged on wood.

A session Baltic Porter, fermented with lager yeast. Notes of roasted malt and chocolate, clean and easy to drink.

A dry and slightly hoppy rendition of a Belgian Blonde. Made exclusively with Belgian malts, Perle and Styrian Goldings hops, Belgian yeast.

West coast inspired Double IPA with a stiff regimen of New Zealand hops. Clean, light bodied with 5 varieties of assertive hops from down under! Dry hopped twice for twice the fun.

The Dark Warror. Belgian-style light stout brewed in collaboration with Warren Cathro of Toronto. Light body and dark as night with roasted notes of coffee and hints of noble hops.

A sour brown ale utilizing Lactobacillus in the kettle. Originally brewed with Urbain Couteau of De Struisse in Belgium.

In collaboration with Urbain Couteau of De Struisse in Belgium. Aggressive, heavily hopped IPA clocking in at 15% abv!

Collaboration with Black Hog of Connecticut, an classic ESB aged on fancy tea.

Based on the clean, quaffable Kolschbiers of Germany, But using loud Australian hops. Highly crushable for the warm summer days! Brewed with Shahin Alireza Khojastehzad of Novare Res Bier Cafe.

Our holiday ale using Lactobacillus and 200 lbs fresh, local cranberries for a tart finish and a blood red hue.

Easy drinking British-style pale ale inspired by the hoppy ales brewed in Burton on trent in the 19th century. Nutty, and smooth with fruity notes from the yeast and the hops.

An ode to Caledonian Brewing Co. in Scotland, this session UK-style IPA should be consumed in quantities while conversing with friends.

This APA uses a clean malt base as a backdrop for Columbus, Centennial and Calypso hops.  Hops were added every 10 minutes during an 80 minute boil and a dry-hop addition was made in secondary giving floral and citrusy notes with a distinctive and bitter finish.

We doubled down on Headstash IPA; more malt, more hops, more abv and double dry-hopped to boot.  Only 6 bbls produced!

Traditional German-style wheat beer that has been fined and briefly lagered for a clear, crisp flavor. All German ingredients including new hop varietal Mandarina Bavaria.

Imperial stout brewed with a lot of oats, served on Nitro.

A spin on our small Baltic Porter we affectionately call “Small Balls”, this is the same recipe using a British yeast instead.  Traditional British Porter, dark and roasty with notes of coffee and coco.

Hoppy amber beer brewed with caramel and roasted malts and Simcoe and Chinook hops for the local cocktail bar The Jewel Box.

Hoppy, dark amber beer brewed with 21% rye malt and finished with a plethora of fresh hops from The Hop Yard.

from our series of experimental IPA’s, this batch is bursting with fruit notes, particularly kiwi, strawberry, mango, and peach. Featuring Galaxy and Idaho 7 hops.

Our large Imperial Stout aged in Heaven Hill Bourbon barrels.  Rich and roasty with touches of bourbon and oak.

a dry hopped black lager brewed for the winner of Over The Hop 2, Black Mamba! made with German malts, pilsner yeast, Citra and Centennial hops.

Our version of an Irish Stout, dark and bold with dominant flavors of roasted barley and British hops. Served on Nitro for enhanced creaminess!

Collaboration with Oxbow Brewing Co. Bright, highly aromatic session beer brewed with the mentality of Head Stash IPA but with half the alcohol.

Robust Porter put to 75lbs of toasted and shredded coconut for two week.  Lots of roasted flavor with a healthy coconut background.  Mounds bar in a glass!

A lager brewed for full flavor, yet very lightly hopped and very low in alcohol.

Our version of a white stout made with Oats and lactose sugar and infused with vanilla and Cocoa.

from our series of experimental IPA’s, this batch is bursting with fruit notes, particularly kiwi, strawberry, mango, and peaches.

Dry Stout made from the second runnings of our imperial stout Straight to Black.

2014 Rumschpringefest aged in oak with multiple Brett strains for 12 months.

Quad aged 18 months in a barrel with Brettanomyces and Maine raspberries. Rich, and complex with notes of chocolate and raspberry jam.

Saison brewed with honey, aged 6 months in stainless with Brettanomyces, and with wild Maine blueberries for the last 4 months.

The first in our house beer series for Novare Res Bier Cafe. A big triple brewed with 150 lbs of house made candy sugar, hopped with Galaxy.

from our series of experimental IPA’s, this batch is featuring Maine grown and malted barley from Blue Ox Malthouse and Azacca, Chinook, and Centennial hops.

from our series of experimental IPA’s, this batch has a touch of oats, and features Mosaic, and Idaho 7 hops, and was dry hopped with nice dose of Mosaic Hop Hash

Sour lager brewed in collaboration with Smuttlabs in NH.

Double IPA made with British base malt and Idaho 7, Mosaic, Citra, and Chinook hops. So juicy!

Brewed with our friends at the Bearded Lady Jewel Box, a sour wheat beer aged on rose pedals and citrus zest.

Summer IPA using Vic Secret hops and British yeast. Get them guns out!

Kolsch brewed with Tettnang and a plethora of NZ hops.

Some of our beers can also be found at select bars and bottle shops throughout Maine.