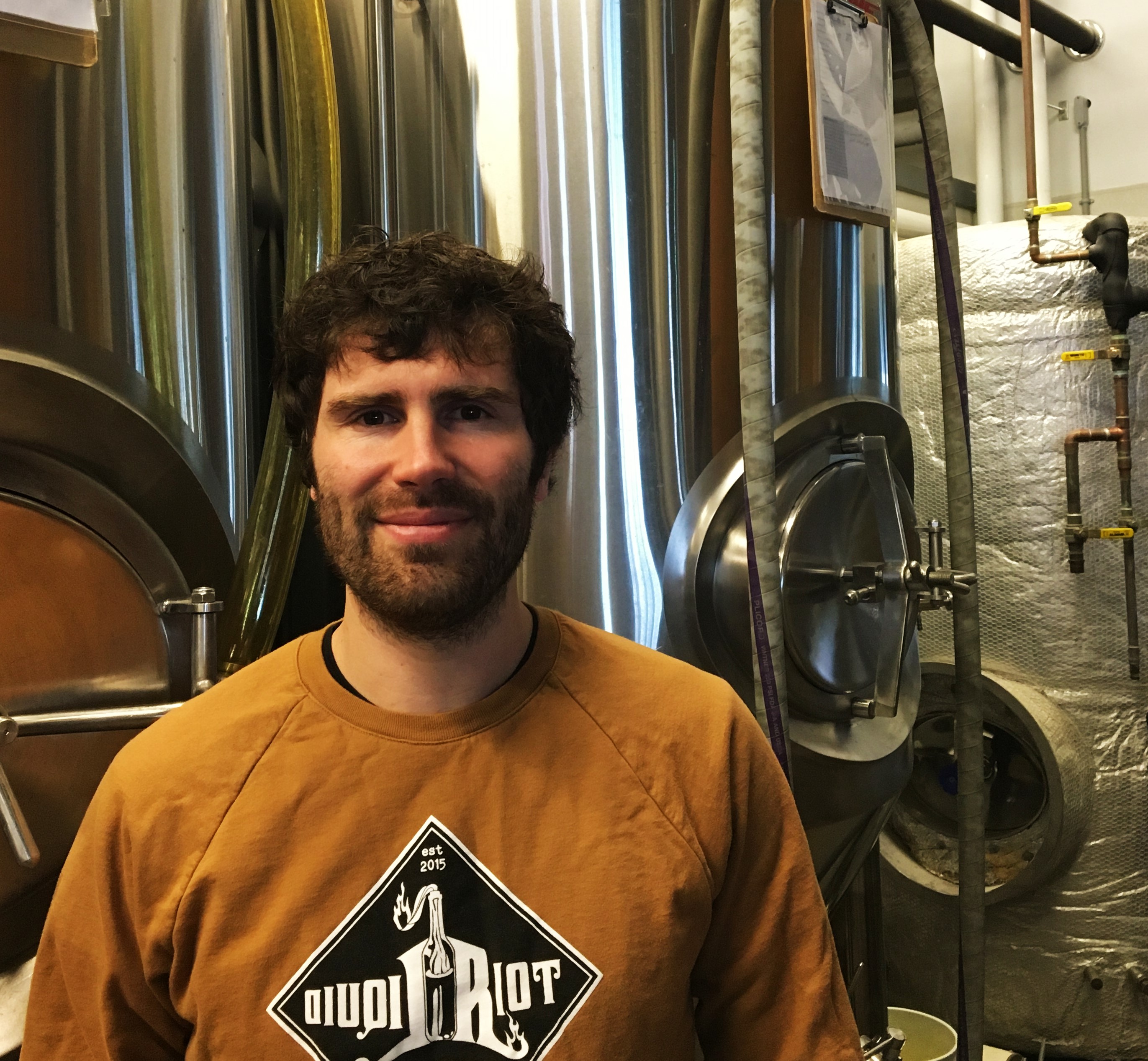 How did you get into brewing?

Just after college I moved to Portland Oregon. At that time the whole West Coast was way ahead of the East Coast in the craft brewing scene. I started discovering craft beer there – what the flavors are and what the drive is. I was doing lots of drinking beer, sampling, meeting people. I think I did one or two homebrews there and then moved back to Portland, Maine. I started doing a lot of homebrewing at that time. That’s when I was really exploring beer styles, beer flavors, discovering what beer can be and what I like and don’t like. A lot of my creativity is inspired by beers I’ve tasted or by other brewers’ approaches and their brewing styles.

What beers or brewers are you inspired by?

At that point, when I was first figuring out what creates different flavors and aromas, beers coming out of Russian River were always influential. Also, a lot of Belgian style beers were of interest to me in the beginning, especially Orval. It’s a pretty interesting trappist beer that’s refermented with wild yeast so it continues to evolve in the bottle.

How’d you go from home brewing to working at Liquid Riot?

I used to be a social worker. I was really passionate about beer, thinking about it all the time and homebrewing as much as I could, so I started to apply to a lot of breweries. My landlord at the time was a friend of Eric’s. I was always serving people beer, and eventually Eric got a taste and was interested in what I was doing. I actually asked if I could use him as a reference as I was applying to other jobs since he’s well known in the beer scene and when he made the decision to open this space he asked me to work for him.

Was that an easy transition?

At that point I realized I had to learn the functions of a brewery. I knew beer and how to make it, but there’s a lot more to it than that. I went up to Oxbow in Newcastle, and I did a 4 or 5 week internship, shadowing them and figuring out how to operate a brewery and then we started here.

Since you have that background in homebrewing, what are some of the advantages to now working in a place like this?

We have all this amazing equipment. So just in general, our beer tastes better than a typical homebrew because we can control temperature, add the right amount of oxygen, carbonate properly.. all these things that are for the most part unavailable to the homebrewer. 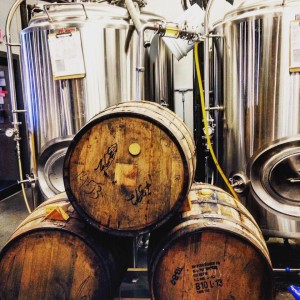 Barrels that will become Blushing Star.

Do you an all time favorite beer that you’ve worked on that you’re most proud of?

I find myself most interested in beers as they’re finishing conditioning and becoming ready. It’s always really exciting and you’re hoping they turn out as you wanted. We did a beer called Blushing Star. It’s a lager that’s barrel aged with wild yeast, which is an unusual combination. Usually you see Belgian beers barrel aged, or ales in general. We aged it for four months on a white peach variety called “Blushing Star.” I’d been searching obsessively for white peaches, and found one farmer who happened to have some and we named the beer after it. It turned out better than I thought it would. It had a really nice tartness and peachy fruitiness from the peaches, and the wild yeast gives a tropical slightly funky flavor, and the barrel gives this soft kind of mellow background.

Is that available now?

We have another batch fermenting and aging currently, but it won’t be ready until we can get the peaches, which is late summer / fall.

Give us a quick idea of what the process of bringing a beer to life is like.

At this point I’m pretty familiar with what flavors will be contributed by different ingredients and at what points to use them to bring out what I’m looking for. In terms of a concept or recipe, those usually come about if I’m inspired by something I’m drinking, or sometimes it’s out of the blue, or I’ll hear about a certain ingredient that spirals into a concept. I used to sit down and try to force myself to think about recipes, but now I kind of wait for the inspiration.

Are there any specific ingredients that you really enjoy using or that you’d like to experiment with in the future?

I’m always interested in wild beer, because that’s where you’re exploring what’s going to happen over time and what’s doing the fermenting and creating these flavors. There’s that, that a lot of modern brewers are interested in. I’m also really interested in really controlled, clean lagers because then there’s nothing to hide behind. You’re just creating this clean tasting malt and hops and alcohol flavor.

Do you have a favorite style of beer?

It’s hard. It kind of depends on the moment, or the season. There’s a time and place for a delicious sour beer. On a cold, snowy day a barrel aged imperial stout can be perfect. Or there are times that it’s a crisp, hoppy beer with delicious American hop aromas.

Favorite hops to work with?

I don’t know if I can choose a favorite. I’d say at this point I’m more interested in exploring new hops before they become a big deal. I have pretty good relationships with some of the hop producers and distributors, so sometimes they’ll send me experimental varieties or tell me about them and I can look into them and talk with other brewers to see if they’ve used them. At this point all the favorite hops in the world are really hard to get so it’s fun to explore different hop flavors and see what you can create.

Any projects you’re working on currently or that are coming up soon that you’re really excited about?

There’s a beer we did called Walter Wit about two years ago and we have the next batch fermenting now. It’s a strong wheat beer fermented with two Belgian yeasts in a stainless fermenter and then it gets transferred to barrels where we add two types of Brettanomyces (a type of yeast) that add some pretty interesting citrusy, slightly funky, tropical pineapple notes. So it turns into a stronger beer but it’s still dry and refreshing.

The first thing that comes to mind is one of the dessert pairings. It’s a scoop of bacon ice cream with a float of our Albino white stout. It’s a classic dessert with vanilla and chocolate, and then the bacon adds a really rich flavor.

You’re out of work, you’ve been around beer all day, what’s your go-to beverage of choice?

It would probably be a beer, something crisp and flavorful.